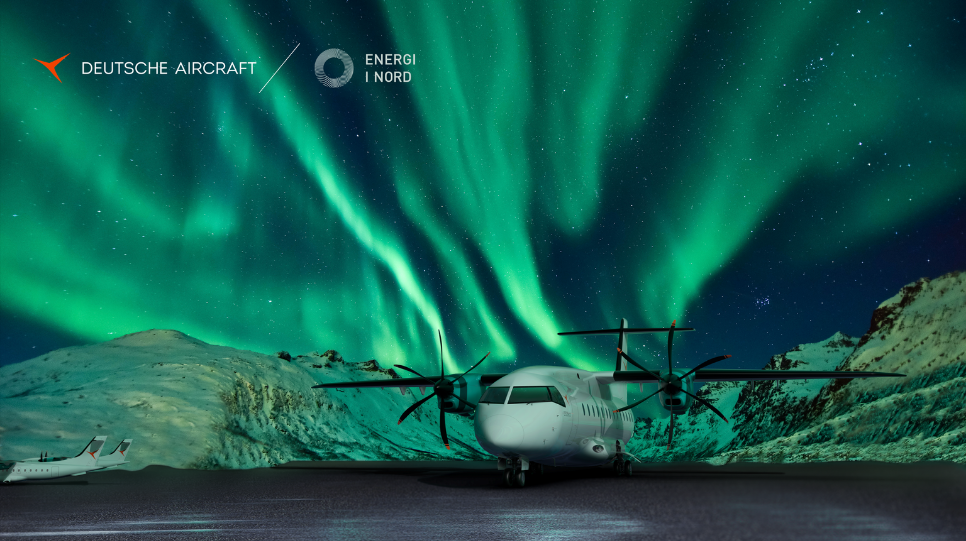 Munich/Bodø, 14th of March 2022. The German aircraft manufacturer Deutsche Aircraft (DA) and the North Energy Cluster (NEC), based in Northern Norway have signed a Memorandum of Understanding (MoU) stating their common goal to develop solutions that will accelerate the availability of climate-neutral aviation technologies. The cooperation of the two partners will achieve substantial short-term reductions of Northern Norway’s aviation climate footprint throughlow-carbon e-fuels. Furthermore, the partners agree to develop solutions to achieve zero climate impact in the mid-term.

“This partnership brings us a big stepcloser to climate-neutral flight.”

"Green flying is the future and it has already begun.”

Munich-based DA is developing a low-emission regional aircraft based on the Dornier DO328 platform well known to regional air travelers all over the world. The D328eco will achieve near carbon-neutral flight in the below 50 seats market with its state-of-the-art technologies and full compatibility with Sustainable Aviation Fuel (SAF). Beyond the D328eco, DA is also studying alternative propulsion technologies based on hydrogen for future programs.

The North Energy Cluster/Energi i Nord is comprised of industrial players such as major wind and hydropower producers, technology suppliers, electrochemical companies as well as the aviation sector and local communities that are determined to take the lead in the energy transition in several sectors including aviation.

Northern Norway is a vast and secluded territory. Its network of 26 regional airports is critical infrastructure, more so than anywhere else in Europe. Coupled with Northern Norway’s excess of low-cost renewable energy vital for e-fuel production, it makes for the ideal testing ground for new concepts within climate-neutral aviation. The initiative intends to produce e-fuels using industrial CO2 point sources as a first step which will later be substituted by direct air capture powered by the abundant renewable energy to minimize lifecycle emissions.

By conducting test flights and studying ground infrastructure requirements for the production of e-fuels, the partnership will pave the way towards Northern Norway becoming a leader nationally and internally in the enormous transformation aviation is facing. The cluster will also collaborate with the Lofoten project “The green islands”, an ambitious roadmap to bring sustainable tourism to one of the most scenic and untouched regions of Norway. In his context, short-haul routes on the Lofoten archipelago will be among the first to be operated with alternative fuels.

“E-fuels and hydrogen produced from renewable energies remain the most promising scalable solutions to significantly reduce emissions in one of the most hard-to-abate sectors such as aviation. What is key to make it happen, is to bring down production costs through scale and we have the right ecosystem in Northern Norway to do so.”

“A significant factor for the environmental performance of the next generation of aircraft is how fuels are produced. Our ambition at Deutsche Aircraft is therefore to think aircraft operation in conjunction with fuel production to achieve an optimal result for the environment. The challenge for e-fuels is the energy-intensive production process which means that you need to go where you can find abundant renewable energy. Regional aviation contributes on a daily basis to the economic functioning of Northern Norway and provides enormous societal benefits. We want to show that you can achieve this without inflicting harm on our environment.

Combining the modern turboprop D328eco efficiency with a 100% SAF capability represents the best way to update the market with a green aircraft in the shortest time possible. “

"Green flying is the future and it has already begun. This is also demonstrated by the cooperation between our member Deutsche Aircraft and Energi i Nord. The introduction of Sustainable Aviation Fuels and in the long-term hydrogen can contribute significantly to the realization of climate-neutral flight. The transformation of civil aviation towards climate neutrality, in which sustainable aviation fuels are indispensable, will be the focus of ILA Berlin. This leading trade show of our industry on sustainability, new technologies and innovation will take place from the 22nd until the 26th of June 2022."